In January 2009, I posted a hairdo described as Wrap-Around French Braid. (It would more appropriately be named a Wrap-Around Halfsie-French “Pop-Out” into a Side Pony, but we would lose people at halfsie!) A photo of the completed hairdo is seen here… 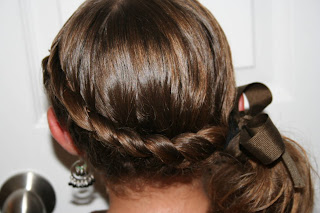 I have had a few readers ask for a video tutorial to show exactly how this hairdo is done. (Just like in French Braiding, sometimes it is better to see it done, rather than try and follow a picture tutorial.) Having just received my iFlip video camera back from a good friend, I decided to show you exactly how to create this beautiful hairdo…

To see your own photo recreations of this style featured in our CGH App, feel free to tag your photos on IG with: #CGHWrapAroundFrenchBraid